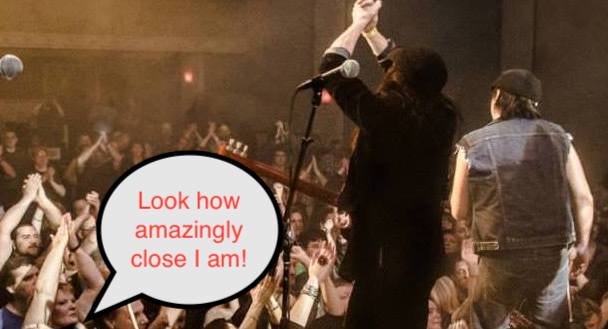 Oregon is the perfect place to listen to live music on a summer night.  Unfortunately, Harefest always falls during wedding season so we will once again miss our favorite tribute band, Shoot to Thrill, at the outdoor venue in Canby, Oregon on July 14, 2018.

I do have a cautionary tale to share for those who might attend.  A few years ago, we saw Shoot to Thrill at one of the old theaters turned concert venues on Hawthorne Boulevard in Portland, Oregon.   We were amazingly close to the stage with only friends between us and the band.  The floor was packed so I was a bit surprised when I felt someone wedging her body past me.  She ducked and pushed until she filled the tiny space between me and the Malcolm Young look-alike .

“Hey-no cuts!” I thought.  I’ve clearly spent too much time with first graders.  I suddenly felt claustrophobic, as if I couldn’t breathe or move, and I wondered if my first graders have a chemical reaction (akin to a panic attack) when others invade their space.  As the Angus Young impersonator skipped across the stage as only Angus Young or impersonators can do,  I worked to regulate my breathing-in, out, in, out—then suddenly, I saw “the look”.   Not only did she take cuts, but she was making eye contact with a friend so the friend could do it too.  A small woman with big hair, big curly 80s wild brown hair, was reaching her hand past my waist toward the cutter.  The cutter grabbed her hand and pulled her through.  Things went from being claustrophobic to sardine can-like, bouncing sardines.   The poufy 80s curly wild brown hair bounced in my chin THEN the wildly curly brown hair hit my armpit AND the long strands stuck!

If you are not a female in your late 40s or early 50s or haven’t lived through this phase of life AND you’ve never been to an 80s rock type concert, you may need an explanation of how the curly brown hair became stuck in my armpit.

First let me explain the concert etiquette from the big-hair band era. The expectation during these concerts is that one hand must be in the air at all times.  The singer at the start of the event often models this behavior then the audience continues throughout.   In unison, audience members, raise a hand and fist pump (sometimes both hands) ceilingward to the beat.  For those near the stage, it’s also appropriate for some, when making eye contact with singer or guitar player, to open the fist and pump the arm in a reaching, swooning, “I’m trying to touch you because I’m a groupie” sort of way.   Bon Jovi explained this expectation his song, “Raise Your Hand.” https://www.youtube.com/watch?v=mcYkb0lSSI0   Before the advent of cell phones, some would hold a flickering lighter up during slow songs and move from a pumping to swaying motion.  Before the introduction of smartphones, the lighters were replaced with open flip-phones, resembling a less fire-hazardous way, of the swaying sea of light during slow songs.  It seems that most phones are now out recording or photographing (though it clearly says on the ticket this is prohibited) during this high arm activity requiring both arms to be in the air (one for phone and one for keeping beat).

Second I feel the need to explain some of the habits and characteristics of perimenapausal women.  For those curious about this topic, Female Brain Gone Insane by Mia Lundin is an excellent resource.   According to Lundin, hormones and neurotransmitters can become imbalanced during this stage of life causing a litany of discomforts, one of which is the inability to regulate body temperature.  Without going into too much detail on the why, it should be noted that women in this phase of life often get rather warm so the best prepared of the perimenopausal group dress in layers.  As one experiences the hot flash onset, it’s not uncommon for one to disrobe.  Based on urban legend, if one isn’t wearing a cami or tank, it’s not uncommon for a blotchy-red, sweating female to find herself topless while wildly fanning in an effort to find some cooling relief.  During times of physical activity (say dancing to the beat of a song while fist pumping), the body tries to cool itself by profusely sweating.  For more information and perhaps remedies on this subject check out Hot Flash:  The Musical.  https://www.youtube.com/watch?x-yt-cl=85027636&x-yt-ts=1422503916&v=mfAeBcD2eV4#t=21

I hope, dear reader, that you are now able to picture how it came to be that my arms were in the air and I was stripped down to my tank top. Even though I’d used extra deodorant, I was a drenched mess.   When the short, poufy haired woman, assisted by her friend, took cuts, her big hair stuck to the Secret scented sweat of my armpit.  She was unaware that her locks were stuck in my armpit OR that I was having a panic attack now that it was even more crowded.  I tried to lower my arm but her hair was stuck.

With my arms up and curly long hair seemingly glued to my right pit, my thinking shifted.  My mind was full of all the times my students had told me they didn’t mean to pull the hair, hit or push the person who took cuts and my empathy for all the kids I had told if they’d slowed down and thought about it before reacting, they might have been able to come up with a better solution.  If I expected children to peacefully deal with others who take cuts, I too could find a way out of my dilemma.

Unfortunately, the AC/DC impersonator was belting out “Dirty Deeds” https://www.youtube.com/watch?v=whQQpwwvSh4&spfreload=10 so the soundtrack to this challenge will be forever conflicted with my actions.  I inhaled slowly, carefully lowered my left hand and in a gentle stroking motion, much like the way I pet a dog, I removed her stray strands from my pit.  Her head bobbing, fist pumping didn’t stop so I don’t think she was aware of her predicament.  I quickly put my arm down and resembled Molly Shannon on Seinfeld the rest of the concert.  https://www.youtube.com/watch?v=Za1XVgQhsJU.

Polite people don’t take cuts and most people are polite BUT if they do, you now know how to remove big hair from your armpit.