The best way to celebrate a birthday is to do something that makes you feel young. Music from our high school days can revive our tired bodies faster than just about anything.  For this reason, we LOVE 80s night at the McMenamin’s Crystal Ballroom.  While the weekly video Dance Attack is always fun, live music on special occasions makes the floating dance floor come alive! On Saturday, January 26, McMenamin’s hosted 6 live bands on 2 floors so it was the perfect way to celebrate my husband’s birthday.

The songs of Bon Jovi, Def Leppard, and Metallica rocked the Crystal blocks.  The tribute bands Steel Horse, Hysteria and Motorbreath energized middle-aged rockers in the Crystal Ballroom while 3 other bands entertained in Lola’s Room downstairs.

I’m not sure how old Mr. Bon Jovi would be now but the musicians of Steel Horse certainly had the energy of the Bon Jovi I remember from nearly four decades ago.  The  lead guitar player was jamming throughout. Oddly, I kept expecting Heather Locklear to make an appearance during one of his solos.  It amazes me that I have to do a full body pat down several times a day to find my reading glasses yet I can remember who was dating back in the late 1900s.

My favorite of the six groups was Hysteria.  My BFF and I were eight rows from the stage when Def Leppard came to Portland in 1987. Though the ballroom is the largest of the venues at this McMenamin’s location on Burnside in Portland, it was small enough to feel like Joe Elliott (or his tribute band stand in) was singing to us.  Just as we’d done in 1987, we stood bouncing and fist pumping the whole time and sang along to every song just like we were 20 again.

We’d also seen Whitesnake in concert back in the day but we didn’t make it down to Lola’s Room see their tribute band.  There was a LOT of big hair in the large ballroom so Whitesnake hair in the smaller venue would have been overwhelming.  Big hair and big shoulders looked good in the 80s.  On these special nights at theCrystal Ballroom, many go out of their way to recreate the special look of that decade.  Security at the Crystal Ballroom includes a metal detector and my tiny wallet was searched to make sure I wasn’t “sneaking in joints.”  As she rearranged my library card, reading glasses, Costco card, tissues, cough drops, medical insurance card (something one my age must always carry for obvious reasons when out for a night on the town) and my Joann’s Fabric 40% off coupons, I couldn’t help but think back to the era when all that big hair was in close proximity to flames.  Long ago, people used matches or lighters to catch the end of small rolled sticks of tobacco, cloves or other substances on fire INSIDE BUILDINGS.  Before vaping, big hair bands and their fans ran the risk of catching on fire in intimate venues.  A Fire Marshal I know would likely have a descriptor for all that hair and should padding but words escape me now.  LUCKILY,  smoking has been banned in public places for nearly ten years so the odds of accidentally catching big hair on fire during a concert has greatly decreased.  I think Breaking Chains, the Dokken tribute band understood this risk as evidenced the picture on their Facebook Page (search Breaking The Chains – A Dokken Tribute).

In addition to the music of Whitesnake, Dokken  and the Scorpions played in Lola’s room.  I’d seen two of the original bands back in the day as well.  Monsters of Rock at the Seattle Kingdome in 1988 included Dokken, Metallica, Van Halen (with Sammy Hagar) and the Scorpions.  My memories of that special event included my beloved Sammy climbing high above the crowd and thinking that he was amazing for being so old (about 40 at that time).  I also remember that the lead singer of the Scorpions told fans to stop throwing stuff at him.  From my seats far, far away, it seemed that he stomped off the stage muttering about how disrespectful the crowd was.  He did so in such a childish way that my sleep deprived brain referenced the event in as essay during my a history final the next day.   Thinking I was very clever comparing a German bands tantrum and Blackout to some major world event, I realize now that I’m lucky I passed the summer term class with a C.  All this came back in a flood of memory as I made it down to Lola’s room to catch the last few songs Lovedrive performed.  As Lovedrive’s lead singer posed a question to the audience as only rockstars can do (i.e. Are you ready Portland), I immediately thought he sounded British–this ruined it for me immediately.   I was not able to identify the songs the group did BUT the crowd had thinned out enough that I was able to walk right up to the stage.  In all fairness, I may have been standing too close to the speakers and I don’t know the words to any of the songs the band might have produced after Winds of Change.  The poor fellow seemed to have a bit of a cold and I nearly offered one of my three emergency cough drops.

The last performance of the night was Motorbreath.  While most in our group were thrilled that we’d made it up so late, the head banging thrash metal vibe of a band that became popular in the 90s (when we were having babies) was hard to enjoy because we didn’t know the words.  Only the birthday boy was disappointed that the group decided to play a shuffleboard at Ringlers Pub in the basement of the building.   “But they are a great band,” he said as we walked made our way downstairs.

Leaving proved to be more of a challenge than entering.  Every pocket of my tiny wallet on a strap had been fondled on the way in.  On the way out, we were stopped by men in black “event staff” sweatshirts.  TSA would have been impressed by the way this crew enforced a rule about liquids.  The glass of wine I’d purchased in the McMenamin’s Crystal Ballroom, then taken to McMenamin’s Lola’s Room and back to the ballroom was not allowed to travel with me to McMenamin’s Ringler’s Pub (in the same building).  The $9.75 McMenamin’s White Rabbit I carried had been slowly sipped over several hours but I still had at least 4 ounces.  Dancing, sipping, singing while NOT spilling the golden liquid was a miraculous feat and suddenly I was asked to slam it or toss it in order to go to the next McMenamin’s where I could buy more if I so desired.   The security team was informed about the beauty of McMenamin’s Anderson School, Kennedy School, Bend, Grand Lodge,  Edgefield and Gearhart where our happy little group has traveled from spot to spot within the McMenamin’s property unhindered.  Someone informed the security team that we invest heavily in McMenamin’s.   In hindsight, I realized that talking about spending big while being unwilling to part with a half-empty glass of wine may send conflicting messages.  I also realized that the security team did a stellar job of calmly enforcing expectations.

Though the wait for an open shuffle board was too long to keep our collective interest at Ringlers, the birthday boy was able to watch the rest of the band’s performance on TV.  Our bartender, Fletcher, was a Metallica fan and his running commentary was informative indeed.  Others left for the soaking pool (this time leaving all beverages behind without an argument since getting to the McMenamin’s Crystal Hotel requires crossing a public street so it’s just logical that you wouldn’t take your glass with you).

We had planned to join them though getting back into our wet suits didn’t seem too appealing and my BFF hadn’t brought anything to wear in the pool.  We ventured next door thinking that we might be able to find a swim suit at the shop, still open, that sported bikini-like outfits on the mannequins in the front windows.  They did not carry swimsuits and her Uber-tribute driver (aka adult son) had arrived so we said our goodbyes and headed back to our room.

Earlier in the day, after checking into our room, named after a Temptations Song (every rooms’ decor is inspired by a Crystal Ballroom performer), we changed into our swimsuits and robes and took the creaky elevator to the pool.   While the bustling Burnside Avenue was just a few feet away when the elevator stopped at the first floor, the signature McMenamin’s robes didn’t give us enough confidence to leave the comfort of the hotel or the elevator this time.  We typically send my very modest sister-in-law photos of our robe-clad adventures as she is mesmerized by the confidence that people show when visiting McMenamin’s in Bend.  From the elevator, we heard our friends and were suddenly shy as the January air rushed in.   One of our tripster friends has been known to ask onlookers if  they want to rub his belly (for luck I assume-like Buddha) so that we were timid in our robes made no sense. 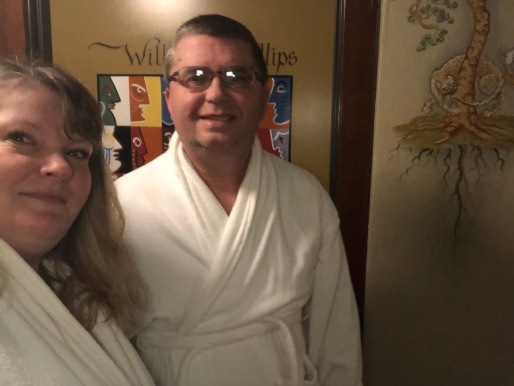 The Crystal Hotel soaking pool has many nooks for private conversation.  The people at McMenamin’s pools are always fascinatingly fun.  The pool is next to Al’s Den and Ringler’s Annex so you can get a beverage to enjoy while you soak.

Ringlers Annex and Al’s Den were packed when we stopped in around 7:30pm. As we waited for our drink, I saw posters announcing that  Al’s Den hosts a comedy night every Friday and Saturday night.  Though as we visited, a guitar and singer mesmerized the crowd with folk music, I could easily imagine the Marvelous Midge Maisel at this venue, downstairs and intimate just like  the Gaslight. #MrsMaisel

By breakfast our middle-aged bodies seemed to protest the joyous experiences of the previous evening.  Coffee is available to hotel guests in the Zeus Cafe so the endless stream of white robed Gen-Xers seemed like an extension of the day before.  Breakfast at Zeus Cafe included the best cheesy grits I’ve ever eaten.  My Six Degrees of Eggs and Bacon  was the perfect start to the day.  The  Zeus Breakfast Menu has a range of options from venison to kimchee.  By 11:00, our tummies were full and we were on our way home.  By 2:00, we were planning our next adventure while humming Hysteria songs.